Painting Anthropology: The Evolution of a Painting

Over the next several weeks I will be highlighting my journey into vlogging. Vlogging is my next step on my painters journey and I am starting with a painting called "Snake Pit". Each individual film posted, will eventually make up a digital story that I will post on my You Tube page. Your feedback is welcome.

Script:
Definition: Painting Anthropology is the archaeological dig into the subconscious mind of a painter. "Anthropology", pronounced /ænθrɵˈpɒlədʒi/, is from the Greek ἄνθρωπος, anthrōpos, "human", and -λογία, -logia, "discourse" or "study". And this film will study the evolution of a painting.
7.5 minutes of film showing in fast motion the development of a painting.
Narration: (voice over fast moving film)

"Snake Pit"
An Image has com 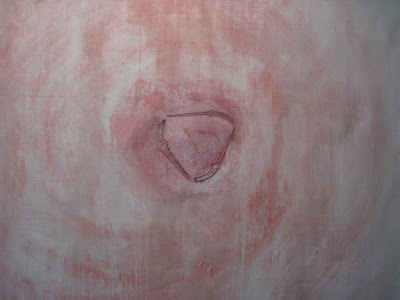 e into my head, “Snake Pit”. The object has taken on a life of its own. The objects (tulip tree twigs) represent ideas or events that are going on in my own life in a symbolic sort of way.

The image conjures up an extended family situation in which all the players are engaged in a sort of snake pit. The image came first, however, the situation, “the snake pit” followed. What is important is that the two ideas were separate and then became one and are being played out on the painting ground. The image has context and meaning to the artist. The spectator would never know this part of the magic. But the video will eventually unearth this reality to the spectator and shed some light on the artistic process.
Posted by Joan Marie Giampa, Art.D. at 12:09 AM