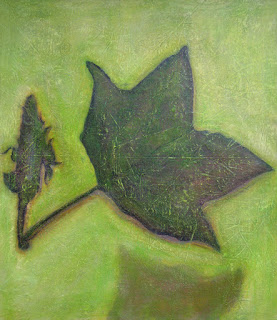 This morning I finished this painting that has been hanging out in the studio for over a year. It has had three lives. The first and second lives had different color palettes. The previous days post shows the painting in its second life before I worked on it again. As I was layering the the fine mists of paint with my brush I felt like I was brushing out the image. The image appeared with each new bath of pigment that was lightly stroked over the entire image with a large painters brush. I apply layer after layer of color until it fully comes to life and has emerged in the final stage. I call this painting "Spring Releaf"...need I say more. 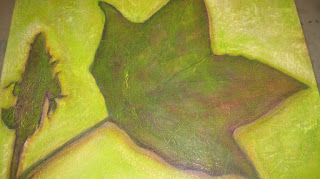 The image looked like this this morning before beginning the work. I made a decision last night to begin todays session with a pink tinted overlay. I needed to tone the green down again. 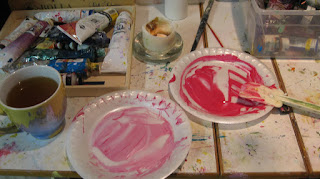 Next I added the final highlights of yellow that would finish it off and reset the mood I want to invoke with this painting. 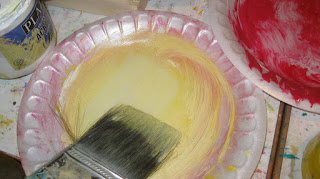 The yellow tint brings up the texture on top of the ground and sets the other pigment colors below the surface. Each layer of this lightly applied pigment creates an illusion of depth and the leaf begins to submerge below the surface of the paint.
Posted by Joan Marie Giampa, Art.D. at 4:54 AM