Today begins my journey into new work and post doctoral musings.  The ideas rolling around are based on my previous work in that I am using the "tulip tree" twig as a starting point to develop a series of paintings using the Latin alphabet.  In an effort to be less academic and more artistic, I am forcing myself to move off the research and into the studio.  My thinking brain really wants to rule this process but my body needs to stop thinking.


My research on the alphabet has lead me to correlations in my work with  asemic writing.  The definition I like best is that asemic writing is the continuum between text and image.  This is similar to the looping process that I discuss in my dissertation with regard to visual metaphor. 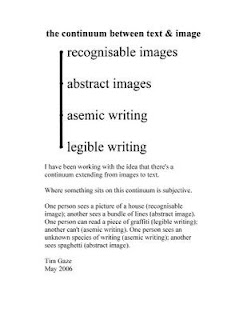 Tim Gaze and his Asemic diagram

A visual metaphor is a bi-directional thought.  For example: “the warts on her nose look like a big green pickle and a pickle looks like a nose with warts”.  Both the pickle and nose with warts are words that can be images and both images are bi-directional.  Because visuals have this bi-directionality, visual metaphors do not need to be based on logic since they rely on perception.  Barry (1997) states that “the creative mind is mainly oriented by perception and only in a later stage by reason” (p. 72-73).  Sinking maps develop visuals from cognitive thoughts or ideas.  This bi-directional process of when perception feeds conception and conception feeds perception forms a looping pattern.  According to St. Clair (2005):
There are other ways of knowing the world and they are not structured in the same way as language systems. Visual systems, for example, are not linear…there is the philosophy of structural communication. A significant part of this model is the reality-loop in which meanings are externalized into forms and already established forms are interpreted into a system of meaning forming a reality loop. Meaning takes place within these loops. (p. 85-101) 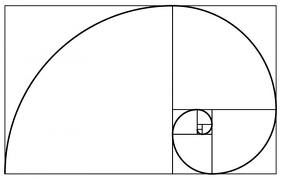 The reality loop is the perfect way to describe what takes place when using the sinking maps.  By mapping a visual process with a conceptual mapping tool, a loop is established that can reverse manufacture itself.  In other words, concepts become visuals and visuals become concepts with the sinking maps.  The loop simply means that a word becomes an image and an image becomes a word.
A great visual metaphor to represent this looping process is the Fibonacci spiral (figure 17).  St. Clair (2005) uses this diagram of a Fibonacci Spiral in his research on visual metaphor to show how mathematics is the conceptual formula for an existing visual in nature—a nautilus shell (figure 18).  The spiral of the chambered nautilus is a logarithmic spiral.  This form can be found in the human body and nature, for example the inner ear and the star
cluster nebula.
Posted by Joan Marie Giampa, Art.D. at 7:00 AM